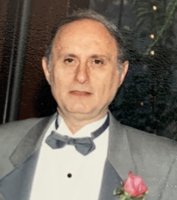 Jerry Liebman died peacefully at home on July 14th surrounded by his family. Jerry was born in Newark, NJ on July 16, 1932 to Rabbi Samuel Liebman and Rose Liebman (nee Berenfeld). Jerry’s family lived on Schyler Ave. in the Weequahic section of Newark where he was raised along with his younger brother Milton, who he was very close with until Milton’s passing in 2014. He attended Peshine Elementary School and Weequahic High School where he was a pitcher for the baseball team, class of 1951. After High School, Jerry attended Pace College. Jerry would carry his love of baseball with him throughout his entire life. He even tried out for the New York Yankees as a left-handed pitcher. He didn’t make the team but that didn’t stop him from always rooting for his favorite team and enjoying many baseball games in person at both the old and new Yankee Stadium. Jerry spent most of his career in the insurance field, first working at Equitable Life Insurance, where he met the love of his life, Paula Schenkel. The two were married on June 14,1959 and would go on to enjoy a wonderful and long marriage of 61 years. Jerry later worked for Transamerica and eventually spent a good amount of his career as an insurance adjuster which he loved because he could be out on the road during the day and meet many different people from all over. He loved connecting and talking to anyone he would meet. Jerry had the gift of gab and would make conversation with everyone. He will be deeply missed by close friends who remember his generosity and loyalty and just overall being a great guy and someone always willing to step up to other’s needs. As a young married couple, Jerry and Paula settled into the Brookdale section of Bloomfield, NJ where they raised their son Robert and daughter Laura. The family enjoyed many vacations with their children to Florida, New Orleans, Cape Cod, Canada and many vacation spots up and down the East Coast. As their children got older Jerry and Paula traveled less but still took trips to Atlantic City often where they enjoyed great meals, loved to see shows and gamble. The family of four remained very close and cared a great deal for each other. That love extended when Jerry and Paula became grandparents in 1994 to twins, Samantha & Brielle Liebman. Jerry loved his granddaughters more than anything and will be remembered as the best grandpa you could ask for! He was always so happy when the girls were around him. They would talk and laugh and even if they disagreed it was fine as he was just happy to have them by his side. The girls were his pride and joy and they will miss him greatly. Jerry is survived by his wife Paula, son Robert and his wife Kris, daughter Laura, two granddaughters, Brielle & Samantha Liebman, sisters-in-law, Barbara Liebman and Carol Green and nephew Richard Green. He is predeceased by his brother Milton and nephew Lawrence Green.